During the production of crude palm oil, large amount of waste water and by-products are generated. POME or Palm Oil Mill Effluent is an underutilized liquid waste stream from palm oil mills which is generated during the palm oil extraction/decanting process and often seen as a serious environmental issue but it is a very good source for biomethane production.

Most palm oil mills and refineries have their own treatment systems for POME, which is easily amenable to biodegradation due to its high organic content. The treatment system usually consists of anaerobic and aerobic ponds without capturing biogas released from the process.

POME is commonly treated using open ponding system just to comply with government regulation without capturing biogas released from the process. A conventional open lagoon system consists of four types of ponds: a fat pit, cooling pond, anaerobic pond, and aerobic pond. The fat pit recovers any remaining FOG in the POME and is generally recovered by the mill operator. The cooling pond decreases the temperature of POME, creating optimal conditions for the decomposition of organic material in the anaerobic and aerobic ponds. After treatment in these four ponds, the effluent is safe to discharge to waterways or apply on land as a fertiliser. Open lagoon system releases large volumes of methane to the atmosphere primarily from the organic decomposition that occurs in the anaerobic pond.

The following photos show some lagoons full of sludge and silt those have to be removed regularly to avoid filling in the bottom of the lagoons.

The majority of digesters that Aqualimpia has evaluated, are simple lagoons  covered with non-elongated HDPE membranes, which  easily crack due to the sun's rays,  get brittle and let the biogas escape.These membranes will be inflated, and because they are not elastic, they stretch and do not return to their original size. In most of the cases evaluated, those digesters do not have mechanical agitation systems and the sludge is not extracted. 30% of these digesters evaluated are out of service or are inefficient, do not degrade the organic load or do not produce biogas.

Aqualimpia Engineering has developed a tropical lagoon system  for the treatment  of wastewater (POME) produced during the extraction of african palm oil. This system is designed and constructed with german engineering knowledge and are highly efficient.

The technology we offer has been built from over 30 years of experience in the design and construction of biogas plants.  Our expertise has helped us to create a tropicalized covered lagoon system  that is very  efficient, economical and  can be constructed by  local companies. Only the technical equipment must be imported from Germany.

We install in all our digester a pumping system to extract the sludge which  sediment at the bottom of the lagoon.

On this way, we do prevent that after a few years of operation the digester will be filled with sludge.

Blankets of scum may form during a startup or after a few years of operation. During startup a thin zone of high volatile acid content may become localized at the digester surface. Under a mature system a thick, black layer of grease, vegetable matter, and concentrated  sludge may cover the entire surface.

Under a mature system the breakdown of scum at the surface of the digester may cause foaming. When scum degrades, a pocket of high volatile acid content develops. The acids produce a condition that is similar to startup. Stratification of non-digested solids near the surface causes foaming.

If foam and scum production in an anaerobic digester is a severe and frequent problem that we have solve in our covered lagoon digester through the instalation of  agitators. 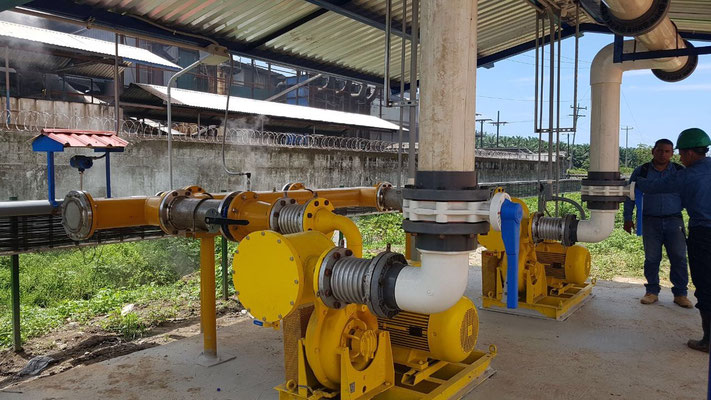 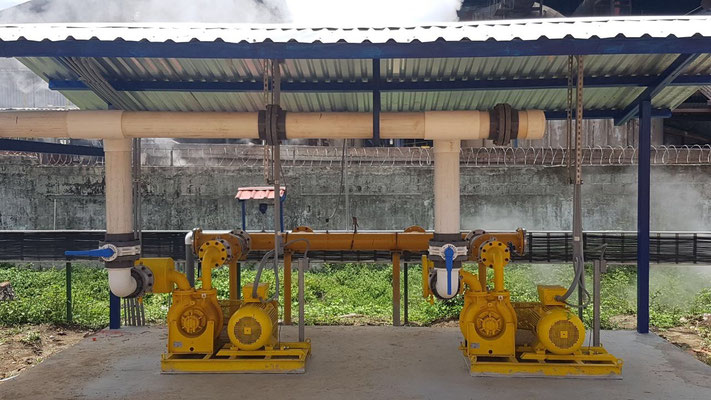 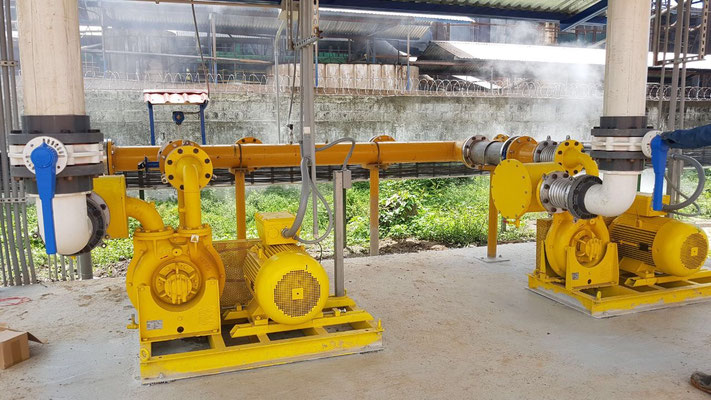 SLUDGE MANAGEMENT AND TREATMENT IN DIGESTER

In  the majority of the digesters that Aqualimpia has evaluated, sludge is chemically treated using flocculants and is never extracted based on the degree of mineralization of the sludges or their age. Fresh, undigested sludge is extracted, which still contains a lot of organic load and fats that make it difficult to separate and dry.

Digestate and sludge from biodigesters that treat POME  can cause high operating costs if they are not extracted following technical recommendations. If the sudge is extracted without knowing his mineralization grade, it will contain high contents of organic compounds,  they are sticky and greasy. Therefore, they cannot be separated from the liquid component and they are not properly dehydrated in sludge drying beds

With German pressure valves and

thickest membrane on the market -

the lifespan is of minimum 20 years

Is member of the